Beelink have released the Beelink i one, powered by the quad core Amlogic S812 and running Android 4.4.2. It is also one of the few Android devices that offers HDMI In, bringing with it the possibility of recording TV or gameplay footage directly from the device.

Beelink i one/ similar Ubox i828 specifications:

It looks like the Beelink i one comes with a comprehensive set of inclusions. Inside the box, you get the media player, HDMI cable, USB OTG cable, power adapter, and a remote control. At this stage, it seems that the included remote is IR only, with basic directional mouse control. Looking over the marketing materials, there seems to be some interesting things mentioned. It appears that Picture-In-Picture will be supported which could be a great feature for those who want to keep an eye on multiple things at once. 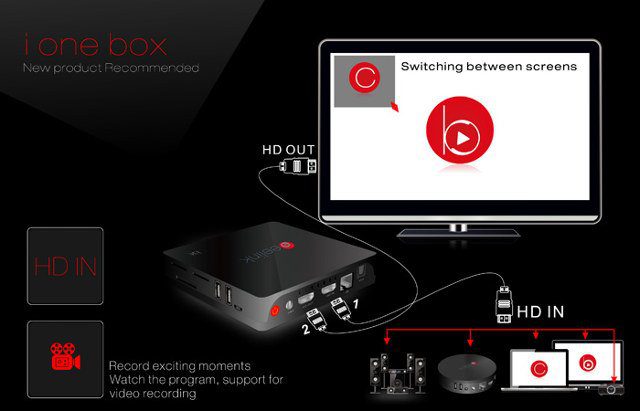 It also talks about the “AZW custom UI” which seems to allude to a custom UI of sorts. I hunted around but wasn’t able to find any screenshots aside from those of the stock Android launcher over at the GeekBuying product page.

You can purchase the Beelink i One from GearBest and Geekbuying for around $120. It appears that GearBest are currently offering a discount (43% off), coming to $110.69 currently. If you use Coupon Code: BI826GB price for Beelink i One reduced to $99. Great promotion.

Source: hometheatrelife.com
Tagged with: AmLogic, Amlogic S812, Android 4.4.2, Beelink, beelink i one, i one